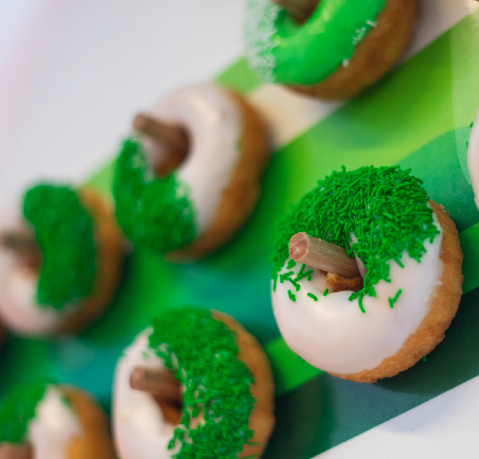 Seen Promotions was given a brief to create the greatest Marketing Activation for the Launch of Energy Australia’s online store. The team enlisted the help of numerous local suppliers (who worked with and supplied Australian made products) to create an edible Marketing Activation for Energy Australia. This included cookies, donuts for the donut wall (pictured) and gelato for the gelato cart; all of which played a part in making the event a resounding success. The campaign was thoroughly enjoyed by staff at both Seen Promotions and Energy Australia, where the subsequent store launch was also declared a success. Buy-in rate from staff was approximately 1,900 staff out of 2,200 in total, a result the client was understandably thrilled with. In the days following the launch, many of Seen Promotion’s apparel and merchandise lines sold out, illustrating the widespread success and appeal of the campaign.

Energy Australia was keen to develop a range of branded clothing and merchandise that staff could purchase via an eCommerce store, and called upon the team at Seen Promotions to assist.

Energy Australia has a very strong brand identity and is a respected leader in its industry. They are an organisation that prides itself on solid employee brand affiliation and engagement.

As such, the client’s requirements were extensive. With such a diverse workforce of 2,500 employees attending different locations in Australia, the client wanted apparel that looked great, was comfortable, affordable and of high quality.

The client was extremely pleased with the branded items stocked on the eCommerce store. Uniforms are not mandatory at Energy Australia, and the sheer number of staff that love and choose to wear the branded apparel daily (even now with remote work) is a testament to the success of this campaign.

Seen Promotions worked with local designers and reputable decorators to guarantee a quality outcome for their client. Engagement was also key to the success of this campaign. Seen Promotions worked with a local graphic designer to create a series of posters designed to build excitement and anticipation. To further encourage awareness, the new clothing range was promoted internally via social media, an intranet homepage and during team meetings. A staff discount was also offered, resulting in a complete sell-out of selected items within weeks of the new clothing range launch.

For Energy Australia, their measurement of success was based on how many of their 2,500 employees purchased the new branded clothing range. Within two weeks of launch most items had completely sold out and Seen Promotions had received over 2,000 orders, completely exceeding the client’s expectations.